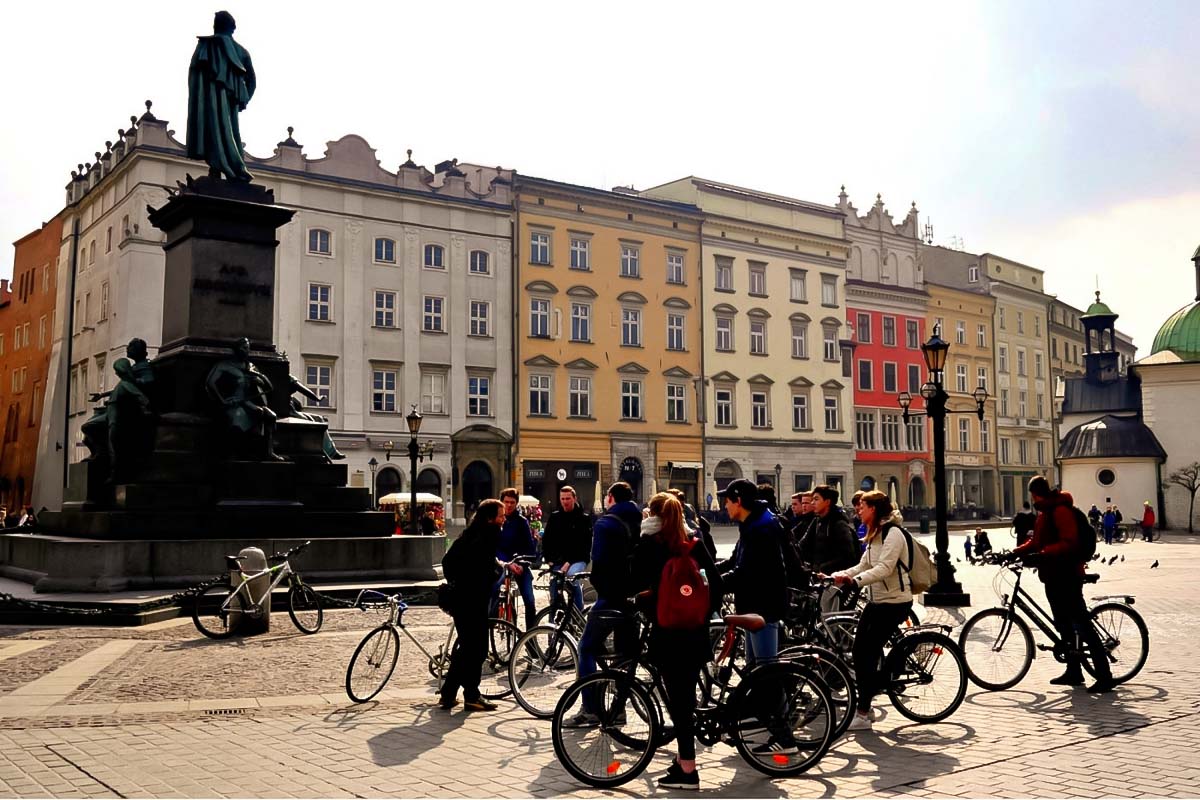 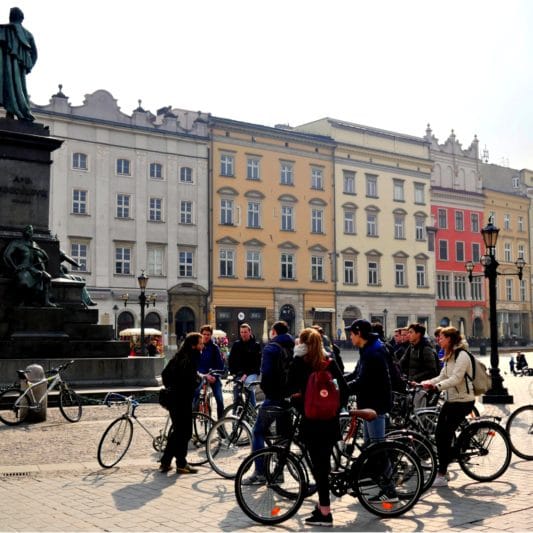 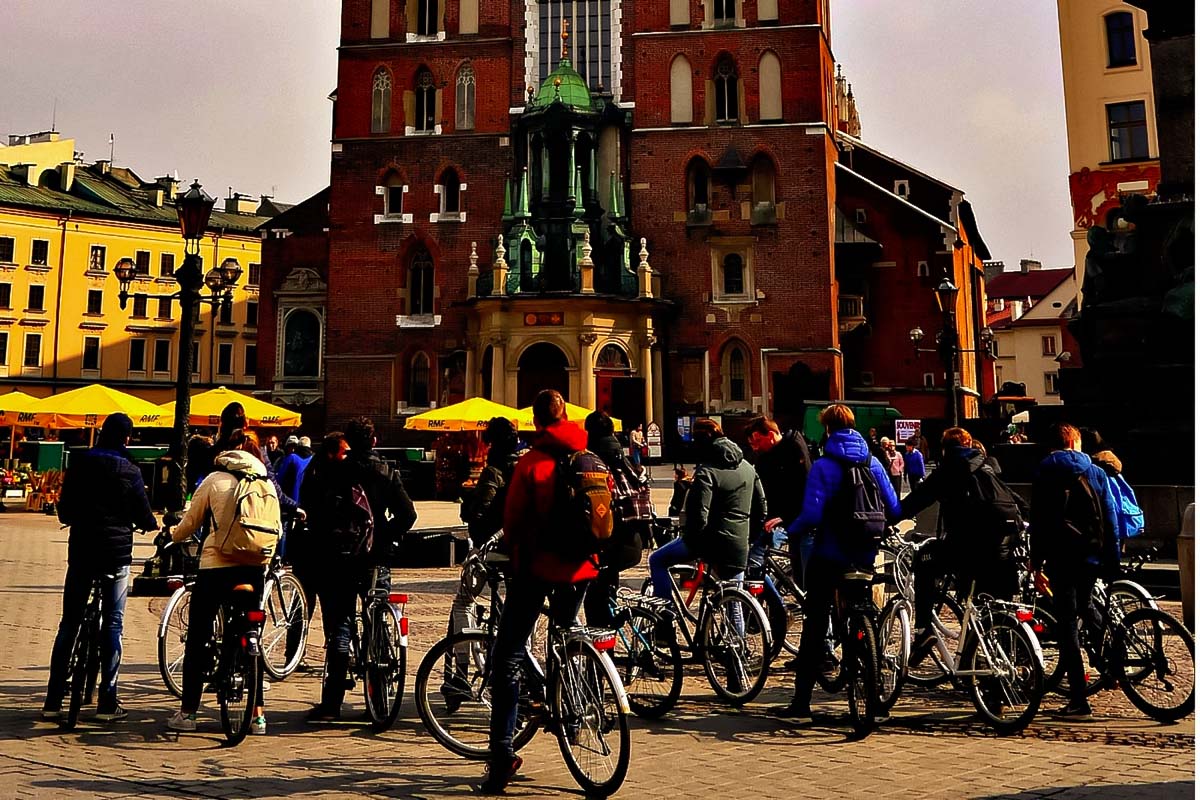 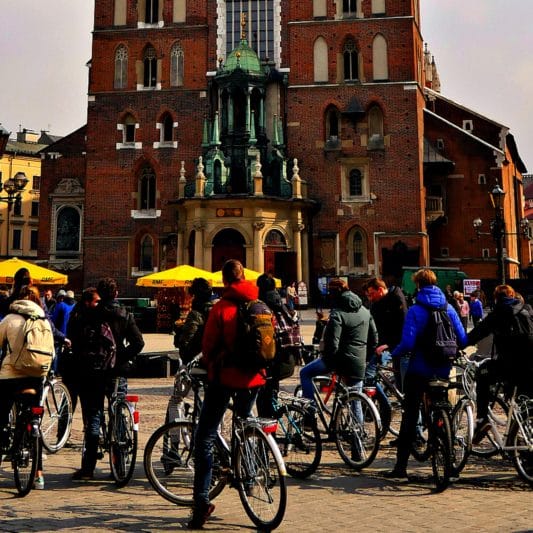 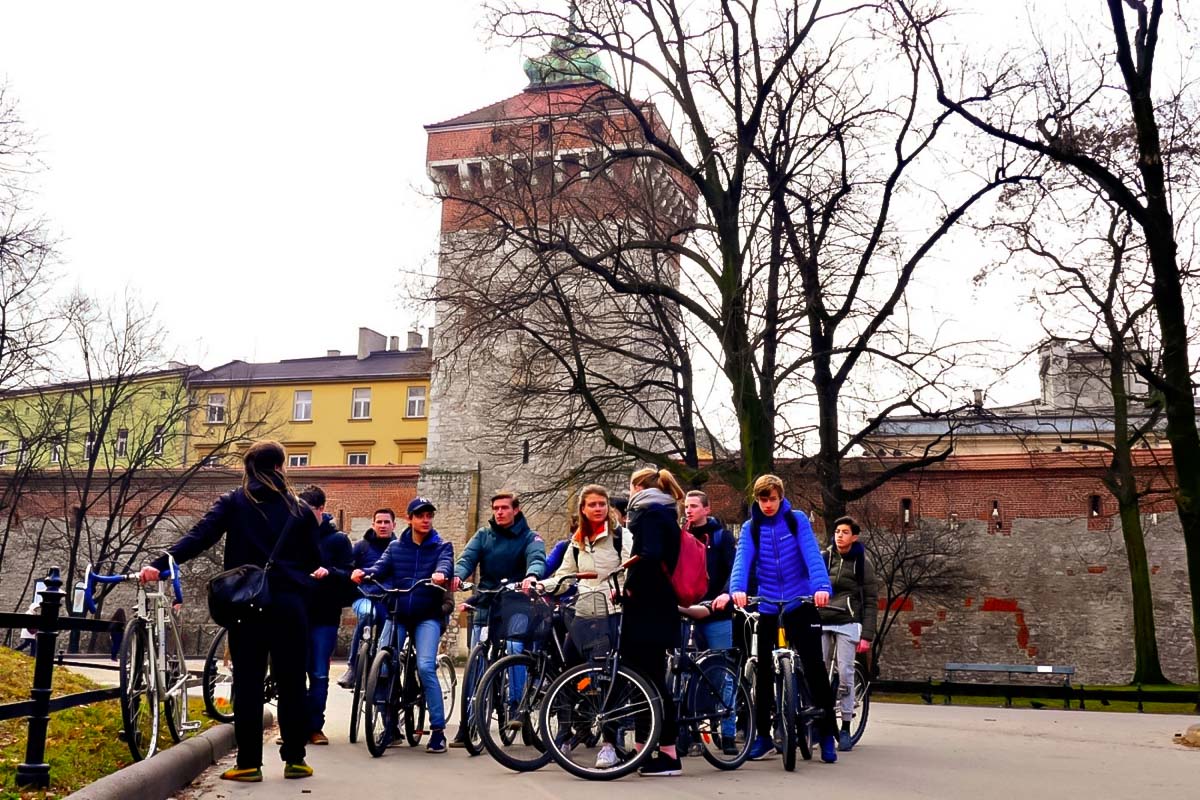 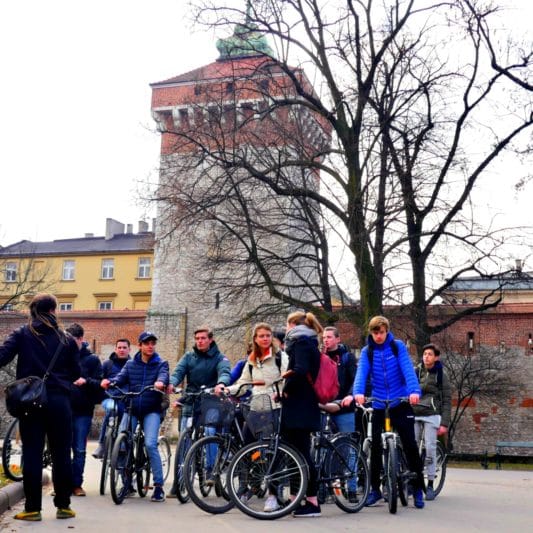 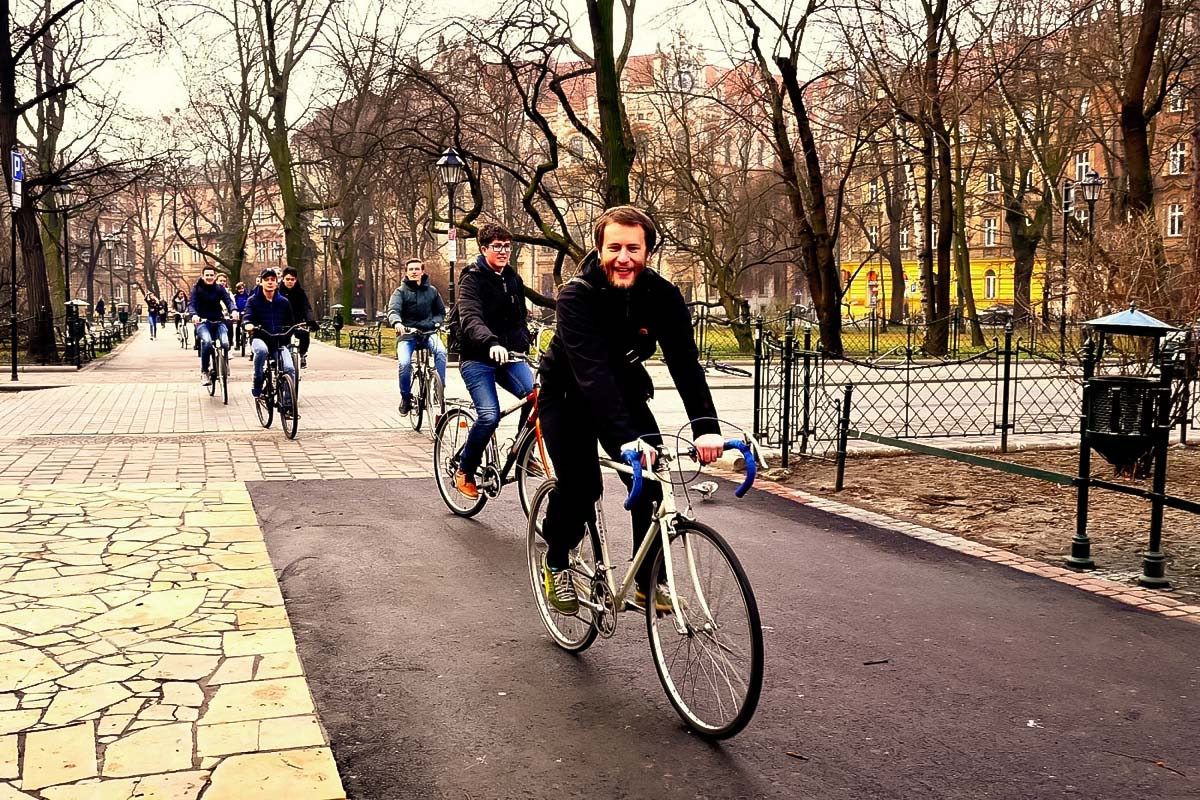 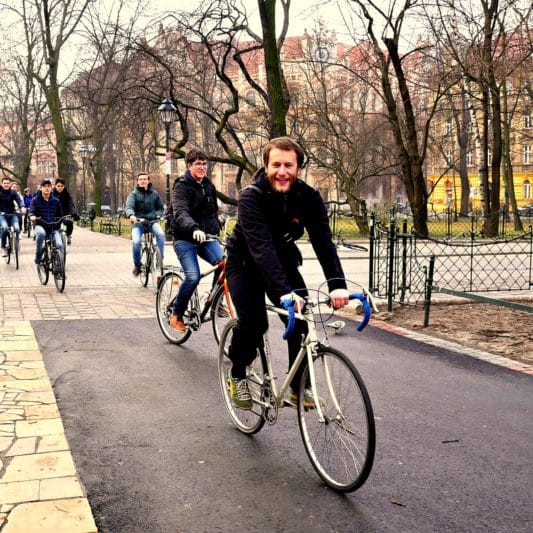 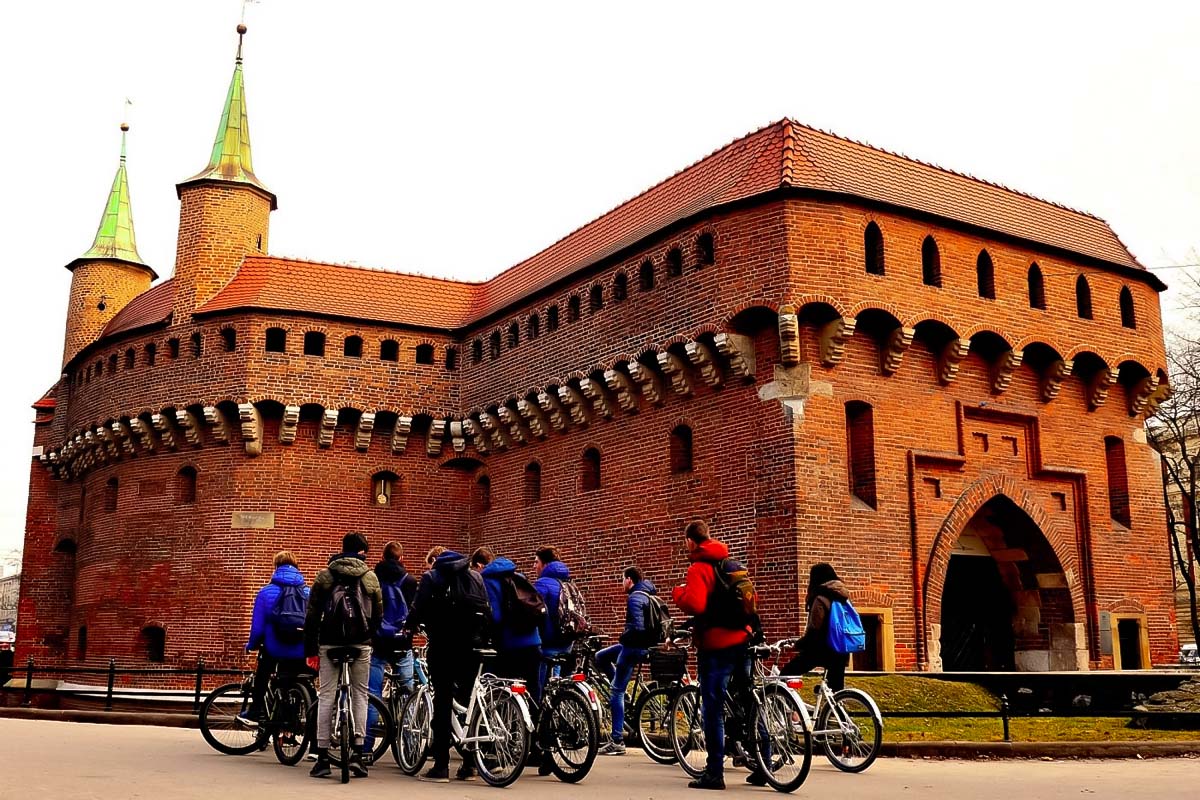 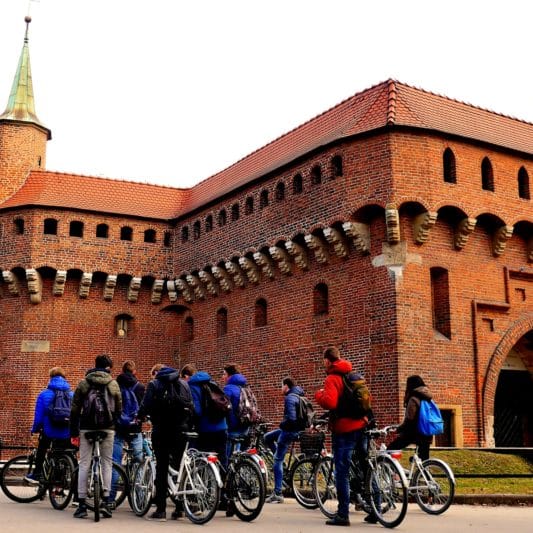 Kraków is one of the few Polish cities in which the architecture withstood the winds of history. It was the official capital of Poland until 1596, and the churches still show the pass of time, the castle still remembers the first Polish kings, and the streets are aligned in a medieval style of castle-town. Krakow has been one of the leading centres of Polish academic, economic, cultural and artistic life and it shows! Cited as one of Europe’s most beautiful cities, Krakow dives deep into your heart and leaves you longing for more. On the bike tour, riding on two wheels will give you an advantage over cars and buses. We will stop wherever you want, take photos, use the pavement for a while, walk or just simply lay on the grass on the picturesque riverbanks of Vistula. Our English speaking guide will lead you through centuries of Kraków’s history in one of the two routes available.

We also offer the possibility of renting bikes and scooters by the hour without a guide and we deliver bikes in any place in Poland (from 10am to 7pm). Please feel free to kontakt oss if you’re interested.

We’ll start with the Barbican (a fortified outpost once connected to the city walls) and just like a wandering merchant, we’ll enter the castle-town from the north making our way towards the Main Market Square. On the way, we’ll pass by the Juliusz Slowacki’s Theatre to have a glimpse of its Baroque facade. Why not choose the boulevard over the crowded streets! We are on bicycles, remember? Our next stop is the old Jewish District Kazimierz, which was once a separate city situated just south of Krakow, then the ghetto during WW II and now is inhabited by an impressive combination of lively pubs, restaurants, unique shops and charming avenues. If you’re hungry we can grab the best ‘zapiekanka’ in town and pedal through Podgórze (another gorgeous district) connected with the history of World War II. Here, Oskar Schindler – the German industrialist saved his workers from the concentration camps. We will also visit the Liban quarry, which was used as a location is Steven Spielberg’s “Schindler’s List”. Our route leads across Kraków’s most beautiful places, with the advantage of avoiding the main crowded roads., thanks to our devoted native cycling enthusiasts!

This is the best way to discover the mysterious corners of Kraków! This tour will take you to places, which the average tourists don’t get to see. “Undiscovered Krakow” is an offer for explorers and enthusiasts that love to discover the world in an unconventional way. We invite you to experience a new adventure! The trip begins at our office in the city center from where we will cycle to the main square where our guide will draw your attention to the details of the old town not usually mentioned on city tours. Next, we’ll cycle to the hidden lake, Zakrzówek. An old stone mine which was flooded in 1990. Nowadays it’s one of the few green oases left in town. Our next stop is located on Lasota Hill where we can check out the old fortress, the smallest church in Krakow and one of the oldest cemeteries in the city founded at the end of the XVIII century. Then we can cycle over to another abandoned stone mine which was used in background shots for Steven Spielberg’s “Schindlers List”. From the Liban limestone mine, we will cycle up to the highest point of the old pagan mounds located around the city, which is also one of the best view points! The date of its founding and purpose is still unknown, however, there are several theories explaining why these mounds were made. At the end of our tour, our guide will take you for the show, where we’ll see how our master uses traditional methods to make glass objects. We guarantee you will have a great trip!